A Kingdom of Justice, Peace and Joy - From Guildford to Crawley 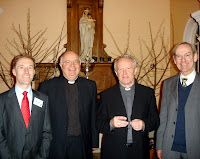 Tuesday 24th February, Shrove Tuesday, saw Seminary staff, Seminarians and Justice and Peace activists together with Bishop Kieran gathered for Mass at St John's Seminary, Wonersh near Guildford to celebrate 18 years of presence of the Arundel & Brighton Justice and Peace Office in the Seminary. Kevin Burr who had worked from there for those 18 years was now retiring and his successor David Thomson is now to work from the Christian Education Centre in Crawley with the rest of the Diocesan Pastoral Team.
It was a sad goodbye to the Seminary but also a celebration of thanksgiving for 18 years of support from St John's and its numerous students and staff. Mgr Jeremy Garratt, the Rector of St John's thanked the Bishop and everybody for attending, and emphasised the importance for the Seminary in supporting Justice and Peace over these 18 years.
In his homily Bishop Kieran reminded us that the mysteries we celebrate in Mass have to be enfleshed in the world and the work of Justice and Peace in the Diocese was one way in which this was made visible.
David Thomson, the new Justice and Peace Adviser for the Diocese is slowly finding his feet and looks forward to take the mission of the Church forward in this area over the coming months and years. He can be contacted on 01293 651155 or david.thomson@dabnet.org and would love to hear from people in the diocese about Justice and Peace issues.
(The picture shows from left to right - David Thomson, Mgr Jeremy Garratt, Bishop Kieran Conry and Kevin Burr)
Jesus said "If anyone wants to be a follower of mine, let him renounce himself and take up his cross every day and follow me." (Luke 9:23)
Posted by AB News Blog at 12:38 No comments:

Arundel & Brighton Diocese is amongst other things committed to Fairtrade and was signed up as a Fairtrade Diocese in June 2005. This coming Sunday Fairtrade Fortnight begins. It is an opportunity for individuals and parishes not only to celebrate the good things that have been done with Fairtrade over the past year but to commit themselves anew in the coming year.

The Fairtrade website says "Two billion people – a third of humanity – still survive on less than $2 a day. Unfair trade rules keep them in poverty, but they face the global challenges of food shortages and climate change too. Fairtrade is a people’s movement for change that aims to tip the balance of trade in favour of poor producers. We all need Fairtrade more than ever and we all have the power to create positive change for people and planet."

Fairtrade it seems is a positive attempt to make a difference rather than just hoping for change. It is one part of the jigsaw that can make a better world.

If you want to know how your parish or school can become Fairtrade then go to www.fairtrade.org.uk for more information and if you are in Arundel & Brighton Diocese then do let us know.

May the Father of Our Lord Jesus Christ enlighten the eyes of our mind, so that we can see what hope his call holds for us. (cf. Eph 1:17-18)
Posted by AB News Blog at 16:27 No comments:

Email ThisBlogThis!Share to TwitterShare to FacebookShare to Pinterest
Labels: fairtrade

This Saturday at the Christian Education Centre in Crawley there will be a day reflecting on St Paul for those involved in Christian Unity and as well as small Lent Group Leaders. The main speaker is Nicholas King SJ on 'Paul for Today'. We are expecting about 200 people and day is now fully booked. Clearly there is a real enthusiasm for St Paul and to find out more about the man and the Gospel he preached.

Accompaying the day is a new resource on St Paul produced by the Adult Foramtion team in the diocese for use by small groups and individuals during Lent. The booklet is available from the Diocesan Bookshop for the incredibly reasonable price of £1.50 plus post & package. Just email bookshop@dabnet.org to get your copies now.

New technology will also be used on the day and we hope that we will have some highlights of the talk by the speaker available on the website as podcasts but it being new to us all here in A&B we will have to wait and see!

Unity for Paul was a key issue and his letters in many ways are often about encouraging these new communities to put aside division and all find their unity in Jesus Christ. Sometimes this involved him in some hard words but always in the context of love and his experience of the risen Lord. As we deal with the issues of unity in our own day then perhaps Paul can help provide us with a model of practice, a 'Paul for Today'.

Horror of the Holocaust and Vatican II

The Secretariat of State of the Holy See, published the following useful note below yesterday afternoon on the subject of the Society of St Pius X and the Holocaust. Obviously it would have been good if this had been communicated before the lifting of the excommunications and before the damage was done. Positively there are strong statements on the issue of Bishop Williamson's denial of the Holocaust and the need for the Society to fully accept the Second Vatican Council and Magisterium of the Church including the many excellent documents and statements on Catholic-Jewish relations. (The picture shows the Pope on his visit to Auschwitz )
The statement reads as follows:

"In the wake of reactions provoked by the recent Decree from the Congregation for Bishops lifting the excommunication on the four prelates of the Society of St. Pius X, and with reference to declarations denying and reducing the Shoah pronounced by Bishop Williamson, a member of that society, it is felt appropriate to clarify certain aspects of the issue:

1. Remission of the excommunication

"As has previously been explained, the Decree from the Congregation for Bishops, dated 21 January 2009, was an act by which the Holy Father benignly responded to repeated requests from the superior general of the Society of St. Pius X.

"His Holiness wished to remove an impediment that hindered the opening of a door to dialogue, and he now awaits a similar readiness to be expressed by the four bishops, in complete adherence to the doctrine and discipline of the Church.

"The extremely serious penalty of excommunication 'latae sententiae', which these bishops incurred on 30 June 1988, formally announced on 1 July of the same year, was a consequence of their illegitimate ordination by Archbishop Marcel Lefebvre.

"The remission of the excommunication has freed the four bishops from a serious canonical penalty, but it has not altered the juridical position of the Society of St. Pius X which, at the present time, enjoys no canonical recognition within the Catholic Church. Even the four bishops, though released from excommunication, have no canonical function in the Church and cannot legally exercise a ministry within her".

"As already affirmed in the Decree of 21 January 2009, the Holy See will not fail, in ways considered most appropriate, to join the parties concerned in a profound examination of outstanding issues, so as to be able to reach a full and satisfactory solution to the problems that gave rise to this painful split".

"Msgr. Williamson's views on the Shoah are absolutely unacceptable, and firmly rejected by the Holy Father as he himself said on 28 January when, referring to that brutal genocide, he reiterated his complete and indisputable solidarity with our Brothers and Sisters who received the First Covenant, affirming that the memory of that terrible event must 'induce humankind to reflect upon the unpredictable power of evil when it conquers the heart of man', adding that the Shoah remains 'an admonition for everyone against oblivion, negation and reductionism, because violence against a single human being is violence against all'.

"In order to be readmitted to episcopal functions within the Church, Bishop Williamson must absolutely, unequivocally and publicly distance himself from his views concerning the Shoah, which were unknown to the Holy Father at the moment he lifted the excommunication.

"The Holy Father asks all the faithful to accompany him in prayer, that the Lord may illuminate the path of the Church. May all pastors and faithful increase their commitment in support of the delicate and onerous mission of the Successor of the Apostle Peter, the 'custodian of unity' within the Church".
'For my eyes have seen your salvation which you have prepared for all nations, the light to enlighten the Gentils and give glory to Israel, your people.' (Luke 2:30-32)
Posted by AB News Blog at 16:38 2 comments:

I lived in Rome for 4 years in the 1980's and snow such as we see today in England and Wales is even rarer there. It did in fact snow twice in that 4 years even though it had not snowed at all in the previous 14 years! The picture shows a Roman tram running despite the snow. On one occasion the snow fell during University term time and so we had a day off as few of the students from elsewhere in the city could get into the University. This was known as 'Prima Nix' (the first Snow). I am likewise held at home today because of the thick snow but 'Prima Nix' or not with modern technology the work goes on. Last week's blog on World Communications Day below quoted from Pope Benedict's message for the day which reminded us of the great value of modern technologies for communication and how we need to use them for the benefit of all.

Today is also of course Candlemas, the Feast of Presentation of the Lord in the Temple where Simeon declares that Jesus is 'the light to enlighten the Gentiles'. Communications in the Church are about being part of that light to the nations and it is something that we need to work on and develop. The current debate around the lifting of the excommunication on the the Bishops of the Society of St Pius X and the views of one its Bishops on the holocaust show quickly a positive story can turn to bad. We need to continue to ensure it is the Good News we proclaim and not bad news.

To that end in the diocese we are organising a day for all those in working with the media either on a diocesan level or in their local area on Saturday 4th April at the Diocesan Offices in Crawley. We hope lay people and clergy will be able to attend and share ideas and information; And that we can continue the task of developing skills and abilities to speak the Gospel in our times. To book a place and for more information email ruth.gerun@dabnet.org

'For my eyes have seen your salvation which you have prepared for all nations, the light to enlighten the Gentils and give glory to Israel, your people.' (Luke 2:30-32)
Posted by AB News Blog at 12:31 No comments: