Year of the Priests? 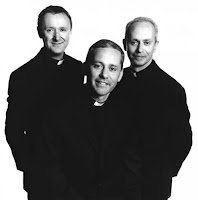 A couple of blog enteries ago I noted that 2009-2010 had been declared the Year of the Priest by Pope Benedict. It might also prove to be the year of 'The Priests', the singing trio of priests from Ireland. Their album has apparently even entered the Guinness World Record for ‘Fastest-selling UK debut for a classical act’. They are keen to promote classical and Christian music in their work. Whilst they still remain busy and active Catholic parish priests, they are also busy promoting their music with concerts and nominations for music awards.

I have to confess I have only caught a snatch of them singing on television so am no expert on their music but if you have listened to it and enjoyed it then why not vote for them in the forthcoming Classical Brit Awards. The voting is open from now until midnight on 1st May 2009. The link to vote for The Priests is: http://www.classicalbrits.co.uk/voting/143

Alleluia He is Risen!

We continue to celebrate Eastertide and give thanks to God for the Resurrection of Jesus. We continue to pray for those new Catholics who were received and baptised at Easter. This year a record number were received into the Church in the Diocese over the easter weekend: There was an increase of over 50% this year and over 50 of them were baptised during the Easter ceremonies.
One of those baptised was 19 year old Callum Day who is training to be a mechanic. He was baptised by full immersion at the Easter Vigil in St Michael's, Worthing in front of friends, family and parishioners. He is shown in the picture just after his baptism holding his baptismal candle. He had not been baptised a young child but he had as a young man felt the call of the Lord to faith. Callum reflecting on his Easter baptism said: “I feel as if I have been reborn and made clean, and that I am able to face the world as a new person loved by Jesus and called to share that love with others.”
For more information about becoming a Catholic contact your local Catholic parish or the Diocese of Arundel & Brighton http://www.dabnet.org/ or see http://www.life4seekers.co.uk/ and http://www.catholicchurch.org.uk/
Posted by AB News Blog at 11:01 No comments: 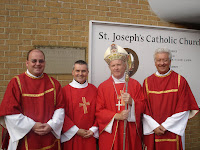 There are 32 active Latin Rite Deacons in Arundel & Brighton Diocese alongside one Eastern Rite Melkite Deacon. They will hopefully be joined by another two deacons to be ordained this summer. There are also another 4 men in formation and we hope several more to join them in the Autumn. Vocations to the diaconate continue to grow not only in this diocese but across England and Wales and indeed the world. Now over 50% of dioceses in the world have ordained permanent deacons who are either married or celibate. There are some 800 deacons in England and Wales coming from all but one diocese.

Last year, the first two deacons were ordained in India in the Diocese of Bombay. Although that diocese has over 600 priests and no shortage of priestly vocations they also wish to restore the diaconate as a permanent state as encouraged by Vatican II in the document on the Church, Lumen Gentium. The Archbishop of that Diocese, Cardinal Oswald Gracias believes, we were told at a recent International Diaconate Conference, that deacons are not about filling in for priests but are an essential expression of Church's threefold ordained ministry of Bishop, Priest and Deacon. Ireland is also set to start its first deacons in formation this autumn and this story is slowly being replicated around the world. 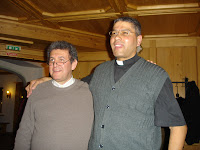 At that same International Conference of Deacons from Europe East and West, America North and South, and Southern Africa we had the joy to meet Deacon Joseph from Botswana in Southern Africa who had been the only deacon in his diocese for more than 25 years but had last year been joined by 6 more men. He spoke passionately about recognizing the vocation of deacons as deacon qua deacon and not as that of some sort of 'stunted' or 'mini' priest.

The picture above shows Deacon Dr Estaban Rojas, a Columbian working in Germany with Italian immigrant communities and Deacon James Garner a business man from Zimbabwe working in South Africa at the final social evening of the International Conference. Ordinary men doing great things in the Church and beyond.

The next blog entry after Easter will reflect on the vocation of religious men and women in our diocese.

'The Lord has given me a disciple's tongue. So that I may know how to speak to the wearied he provides me with speech.' (Isaiah 50:4)
Posted by AB News Blog at 10:14 No comments:

Of Bishops, Priests and Laity 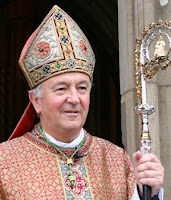 About the same time as it was officially announced that Archbishop Vincent Nicholls of Birmingham (pictured right) had been appointed as the new Archbishop-Elect of Westminster our own Bishop, Kieran Conry was presiding at the funeral of Fr Cyril Cravos a priest of the diocese of Arundel & Brighton.
Fr Cyril was born and educated in Cardiff before joining the Royal Navy as an electrician. As an older man he applied for the priesthood and was ordained as a priest in January 1975 aged 44.
He served in numerous parishes in the diocese as an assistant and parish priest before moving then to his final parish of Sacred Heart in Newhaven in 1999. He had gone into a nursing home at Littlehampton where he died aged 78 but still as parish priest. He displayed a real commitment to priestly life.
As a Church we always need Bishops but we also always need priests. Fr Paul Turner who works to promote vocations to the Priesthood and Religious life has organised a number of events for men who might want to pursue that vocations which can be found on the diocesan website.
Equally important as part of the whole People of God is the lay people of the Diocese. Arundel Cathedral parish is currently mourning the loss of John Brazier who was for 30 years a server and later on a sacristan at the Cathedral. He will be missed by family and friends but also by all who attended the Cathedral over the years. His funeral is on Monday 6 April.
This particular blog has mentioned most of the People of God but deliberately missed out Deacons who will feature in the next post.

Please pray for the future ministry of Archbishop Vincent and the repose of the souls of Fr Cyril and John Brazier.

'May the souls of the faithful departed through the mercy of God rest in peace'
Posted by AB News Blog at 11:52 No comments: