Sharing the Faith - The Role of the Catechist

No parish would manage to organise its First Communion, Confirmation, RCIA, Marriage and Baptism classes and so on without the help of a whole of army of Catechists. They play a vital role in this country in sharing the Catholic faith with young children, teenagers and adults. In many other countries especially in Latin America and Africa with large parishes and small numbers of clergy they play a vital role in animating and promoting the Christian life in their local area.

Catechists, therefore, whether in this country and elsewhere working with their Bishops, Priests and Deacons play a vital role in passing on the faith of the Church.

The Catechism of the Catholic Church, the cover of which can be seen above, says in its Prologue that "Catechesis is an education in the faith of children, young people and adults which includes especially the teaching of Christian doctrine impaed, generally speaking, in an organic and systematic way, with a view to inititating the hearers into the fullness of Christian life."

Given such a demanding purpose of catechesis it is important, therefore, that any Catechists are properly trained. In this diocese the Adult Formation Adviser, David Wills (pictured below) is working hard to support new locally based training for Catechists. Redhill Deanery 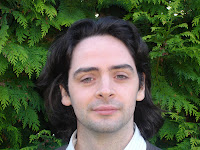 has recently finished a programme of training for Catechists and Cathedral Deanery is soon to launch a series of sessions lead by clergy and lay people for Catechesists, new and old from 5th October. The first term will focus on the content of faith in areas such as the person of Jesus to the Church. The second term will focus more on the methods needed to hand on this content. Anybody interested in finding out any more about this course and running one in their parish or deanery should contact David Wills on david.wills@dabnet.org.

I, however, leave the last word to the Catechsim that states that the ultimate purpose of catechesis is to help people "believe that Jesus is the Son of God so that believing they might have life in his name..."

To Praise, To Bless, To Preach 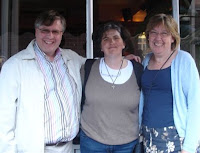 At the weekend I was in a very sunny Dublin for the final profession of a Dominican sister and friend of mine, Sr. Susie O'Rawe. It was a wonderfully occasion as Susie after many years searching and discernment knew she had finally found the vocation to which God was calling her. She now starts her ministry in earnest as a School Chaplain living with a community of 5 other Dominican sisters in Dublin.
(Picture shows Sr. Susie centre with my wife and me)

We are all called to respond to God's plan for us whatever that might be. This diocese through the Vocations Team organising a day called 'God's Plan 4 U'. It is a day to reflect on what your vocation might be and how you can be part of the Church's mission to the world. To find out more and to print out a poster for it click here.

In the Year for Priests there is a real focus on priestly vocation on the Diocesan Vocations Website but this is not to forget the other vocations to religious, diaconate, married life and lay ministry. To help young people in this search there are also two vocations group that meet monthly in the diocese in Crawley and Woking under the aptly named title of the 'Samuel Groups'. Again information can be found on the Vocations Website.

The Dominicans sisters have the motto 'To Praise, To Bless, To Preach'. This is probably a motto all Christians could adopt whatever their vocation.

There was a very interesting discussion on this morning BBC Radio 4 on 'In Our Time' with Melvyn Bragg, on one of the most famous Dominican son, St Thomas Aquinas which is well worth listening to on BBC iPlayer. To find out more about the Dominicans in the UK why not visit their new website http://english.op.org
Posted by AB News Blog at 16:08 No comments:

Sent out to the World - Missio Re-Launch

Yesterday evening in Westminster Cathedral representatives of the hundreds of thousands of people who have given so generously to the Pontifical Mission Societies (PMS) over the course of several lifetimes travelled to Westminster Cathedral from across England and Wales. They joined by Archbishop Vincent Nichols who celebrated Mass to mark the launch of the new name of Missio for PMS in England and Wales.

They were also there many from A&B including Canon Brendan McCarthy who was until recently the Director of PMS in the diocese. Canon McCarthy at the end of Mass read a congratulatory message from Cardinal Dias the Prefect of the Congregation for the Evangelisation of Peoples. He reminded us of the words of Cardinal Vaughan who said that as the Church in England and Wales we must reach out "to the people most abandonded and poorest in the means of grace."
Fr Richard Biggerstaff, parish priest of Lewes (pictured below) has this year taken over this role from Canon 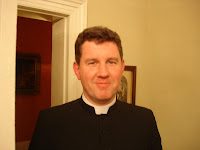 McCarthy and is hoping for the continued support of the people of the diocese for the work of Missio and in particular the APF Red Boxes. The new name Missio expresses a renewed commitment to overseas mission. For over 70 years ‘To be a Christian is to be a missionary’ has been a familiar theme to people in England and Wales as they supported the missions through Association for the Propagation of the Faith (APF) and its Red Boxes, currently present in over 200,000 homes across the two countries. Countless people have helped innumerable individuals and communities in young and developing Churches through this very simple means of fundraising. This was shown during August when Mgr John Dale, the National Director of Missio in England and Wales disbursed almost £3 million from the parishes and from individual generosity, through the Papal Nuncios in the world’s mission areas, to the poorest, youngest and most needy Churches in our universal family.
Missio is a name already used by PMS across much of Europe, recognising and symbolising in the Church's unity as it shares faith, and builds lives and communities in each of the world’s 1,069 mission dioceses, where, in the rapidly-expanding Church in Africa and Asia, young churches often face extreme difficulties.

Missio consists of 4 organisations grouped together: The Association for the Propagation of the Faith (APF) which assists each and every one of the Catholic Church's 1,062 mission dioceses and territories to provide pastoral care and preach the Gospel effectively.
The Society of Peter Apostle which is the Church’s official fundraising body for the training of clergy and religious in mission countries.
Mission Together which under its original name of Holy Childhood, Mission Together has been active in Catholic schools for over a hundred and sixty years.
And finally The Pontifical Missionary Union (PMU) which aims to promote an awareness of mission and a spirit of unity, prayer and generous sacrifice among priests, religious and laity.
Many of those who attended were from other agencies of the Church who support poor communities overseas from CAFOD, Mill Hill and elsewhere.
For more photos of the event including a picture of Canon McCarthy read the Prefect's letter go to http://www.flickr.com/photos/catholicism


Jesus said 'All authorty in heaven and on earth has been given to me. Go, therefore, make disciples of all the nations'. (Mt 28:19)
Posted by AB News Blog at 09:34 No comments: