Did Shakespeare Ever Visit Rome?

For the first time ever, the Venerable English College in Rome, is running an exhibition that explores the history of the College, from its foundation as a hospice in the 1300s to its transformation into a seminary in 1579: Non Angli sed Angeli.

Among the exhibits are copies of three mysterious signatures on pages of parchment in the College's leather bound 16th century guest books for visiting pilgrims: 'Arthurus Stratfordus Wigomniensis' signed the book in 1585, while 'Gulielmus Clerkue Stratfordiensis' arrived in 1589.

The entries fall within the playwright's 'missing years' between 1585, when he left Stratford abruptly, and 1592, when he began his career as playwright in London. Fr Headon said: "There are several years which are unaccounted for in Shakespeare's life," adding that it was very likely that the playwright had visited Rome and was a covert Catholic.

The 'Shakespeare' entries are being kept in the college's archive for security reasons but have been reproduced for the exhibition, which illustrates the history of the college from its origins as a medieval pilgrims' hospice to a refuge for persecuted Catholics during the Reformation.

Below is a picture of the newly restored English College chapel for more information on that and the work of this seminary see: www.englishcollegerome.org/ 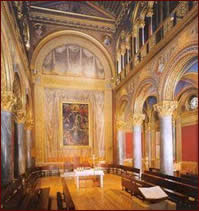