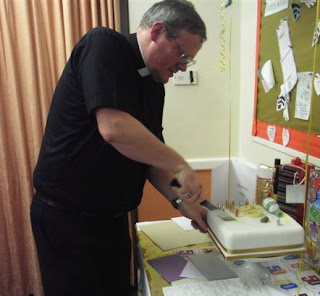 Congratulations to Fr Daryl George from East Worthing Parish who recently celebrated his 50th Birthday.
The parish celebrated the occasion with a party and, of course, a cake!
Posted by AB News Blog at 14:53 No comments:

﻿﻿﻿﻿﻿
﻿﻿﻿﻿﻿ A group of Servers of St. Mary's Church, Rydes Hill, Guildford for the celebration on 26th December 2010 of the 55th anniversary of the affiliation to the Archconfraternity of St. Stephen. During the Mass Elena Brown and Rebecca Phillips were enrolled as Servers, Caroline Brown was presented with a Certificate of Merit for five years regular serving, and Sandy Hunt a silver medal for ten years.
Posted by AB News Blog at 14:50 No comments:

“A star studded life of service” summed up Sr. Denise Wood, artist and mathematician, of the Congregation of St Dorothy. She died on 17th November as a result of injuries sustained in a traffic accident when on the way to early Mass on 3rd October.

The Chief Celebrant, and preacher, at her Funeral Mass on 2nd December was Rt Rev Stephen Ortiger O.S.B.who said "Sr Denise now shares Christ’s victory over death. Rejoice in her and our faith”

Sr Doreen, the Regional Superior, paying tribute to her friend and colleague, said Sr. Denise joined the Dorotheans in her early twenties, first qualifying as a music teacher. She went on to gain a B.A. in education in the United States. She spent much of her life teaching Maths, English, Italian, Needlework, Music, Catechism and giving Religious Instruction. Knitting was a great hobby; in breaks between marking piles of exercise books, and right through until her last days. She also embroidered beautiful altar cloths which are much treasured.

In 1975 she was elected Counsellor to the Mother General of the Congregation for a period of six years. Next she was elected Provincial of Malta and U.K., being one province for the Dorotheans. Later she became Superior of 2 convents in Malta (Sliema and Mdina) and finally Redhill.

Whilst keeping a humble and low profile, she was prayerful, a natural leader, a great organiser, and often used her keen sense of humour to diffuse a situation. Her example motivated others to pray assiduously and work without counting the cost.

Christian symbols of crucifix, book of the gospels, and photograph of St. Paul Frassinetti, foundress of the Congregation were placed upon her coffin.
As befitting a person so well loved and respected, the parish farewell took place with every possible ceremony. He coffin was received into St Joseph’s church, part of the Nativity of the Lord Parish, the previous afternoon. Later on Evening Prayer for The Dead was said; later still there was a vigil Mass at 8.00 p.m. and finally Night Prayer two hours later.

May she rest in peace
Posted by AB News Blog at 16:29 No comments:

Pope Benedict XVI was presented with the official Papal Visit DVD by Papal Visit Co-ordinator Mgr Andrew Summersgill at a recent weekly Audience in the Vatican.

Pope Benedict congratulated Mgr Summersgill on all of the good work from those responsible for organising the Visit, echoing his words at the General Audience on 22 September, immediately after the Visit:

“From the very first day of my stay in the United Kingdom and throughout my Visit I met with a warm welcome from the Authorities, from the representatives of the various social realities and of the different religious confessions and, especially, the common people. I am thinking in particular of the faithful of the Catholic Community and their Pastors who, in spite of being a minority in the country, are widely appreciated, esteemed and committed to the joyous proclamation of Jesus Christ, making the Lord shine out and making themselves his voice, especially among the lowliest. To all I renew the expression of my deep gratitude for the enthusiasm shown and for the praiseworthy diligence with which they strove for the success of my Visit, whose memory I shall always cherish in my heart.”

The DVD has been produced by the Papal Visit office following unprecedented interest on the official website, which hosted the most-watched webcast ever in the UK. It is estimated that between 5 and 8 million people watched the Papal Visit on the webstream, either live or on the watch-again facility. This footage has now been archived as a permanent legacy on http://www.thepapalvisit.org.uk/.

The DVD is available from the DABCEC bookshop at price of £9.99
Posted by AB News Blog at 16:16 No comments:

Rite of Election, RCIA and the Ordinariate

The Rite of Election for those Adults to be baptised or received into full communion will take place on the 12th March at Arundel Cathedral. This is a wonderful occasion when, together with sponsors and catechists, they gather with Bishop Kieran to begin the lenten liturgical journey leading to baptism or reception at the Easter Vigil on 23 April.

Information on this is going out to parishes shortly but to find out more go here. We hope as many candidates as possible will attend as it is a great opportunity to encounter the Diocesan family for the first time, gathered around our Bishop. The Elect, those to be baptised, have their names entered into the role of the Elect. Candidates for reception are also warmly welcomed by the Bishop and encouraged in their faith. The Bishop makes a huge effort to speak to as many of those who attend as possible.

This year we also have the creation of the Ordinariate in England and Wales for former Anglicans who wish to become Roman Catholics. Assisting with Anglicans who wish to become Catholics as part of the Ordinariate is our Episcopal Vicar for Mission and Unity, Fr Tony Churchill. Their process of reception will be slightly different to other candidates and to explain this the Bishops' Conference have produced a useful series of Questions and Answers on their website.

We wish all candidates coming into full communion with the Church in whatever way every welcome and prayer.
Posted by AB News Blog at 16:10 No comments:

Benedictine Monks from Ramsgate to Move to Chilworth

The Franciscans Friars have now left the parish of Chilworth, (including Gomshall) near Guildord, Surrey in Arundel &Brighton Diocese but Benedictine Monks from the Subiaco Congregation will now be taking residence there. It will no longer run as a parish Church. Former Parishioners from Chilworth Friary and Gomshall are being welcomed by the many other Catholic communities in the area in Cranleigh and Bramley, Guildford, Godalming and Dorking.
The BBC reports: 'The Benedictine Monks of St Augustine's Abbey, Ramsgate, voted to leave their home of nearly 150 years because they could no longer afford to maintain it. Now they are set to move into the Franciscan Friary in Chilworth, Surrey.


The Order of Friars Minor, which is vacating the 118-year-old friary, has welcomed the fact that it will continue as a home to a group dedicated to God. The 11 monks say they are being forced to leave St Augustine's, which was designed by Edward Pugin for around 40 people, because there are not enough of them left to bear the cost of its upkeep. The monks help fund monastery running costs by selling products such as honey, beeswax furniture polish, organic lip-balms and skin creams. They also have a small market garden.
The monks voted to leave in October last year, and within four months had found an ideal replacement.
The friars had had to make their own difficult decision to leave their Chilworth home for similar reasons, and thanks to the reach of the worldwide web, they were able to find suitable successors for their Victorian home. Father Michael Copps, Minister Provincial of the Friars Minor, said: "One of the most difficult things I have had to do as Provincial was to come to the decision that we could no longer sustain our house at Chilworth. I had been thinking with horror that it might become a hotel or health spa, until I was shown the information on the internet that the Ramsgate Benedictines had decided that they had to leave Ramsgate and look for a smaller monastery. Reading their 'wish list' for the place they were looking for, I saw that Chilworth ticked nearly all the boxes."

Dom Paulinus Greenwood, Abbot of Ramsgate, said: "We have been extremely fortunate in finding a suitable new home within such a relatively short period of time, and will always be grateful to the Franciscans for alerting us to the availability of their Friary."

The friars will disperse into other friaries around the UK.'

The Diocese offers a warm welcome as the Monks begin their ministry of prayer and contemplation amongst us.
Posted by AB News Blog at 09:52 No comments:

Thinking About Easter in January! 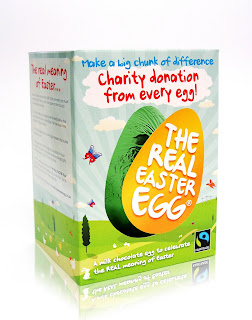 Last September supermarkets rejected the idea of The Real Easter Egg which is the first and only Easter egg to explain the Christian understanding of Easter on the box. Church schools were asked to help join a campaign to help prove demand by placing orders before Christmas. Thousands of eggs were ordered by schools in quantities ranging from 12 to 400 eggs at a time.
Churches and individuals are invited to join the campaign and place orders for The Real Easter Egg by 31st January 2011. Order forms, posters and flyers can be downloaded from http://www.realeasteregg.co.uk/ Eggs will be dropped off to a single address in early April 2011.
The direct sale price of The Real Easter Egg is £4.50 each which includes a charitable donation, VAT, handling and delivery to a single drop off point. The 125g high quality Fairtrade milk chocolate has to be ordered in multiples of 12.
Posted by AB News Blog at 16:16 No comments: