A Thought for Christmas from Bishop Richard Moth

On December 8th, Pope Francis opened the "Holy Door" in St. Peter's in Rome. This ceremony marked the beginning of the Jubilee Year of Mercy, a time that Pope Francis has called the Church throughout the world to celebrate. By the time the Year of Mercy ends in 2016, countless pilgrims will have walked through the Holy Door, offering prayers and opening their minds and hearts to a God who calls us to share His love and mercy with others.

Pope Francis also asked that the Cathedral Churches of the world open Holy Doors, to enable people to make a special pilgrimage during this year. So, on 13th December, the Holy Door of the Cathedral Church in Arundel was opened. It was a wonderful celebration with people from all over the Diocese joining together to mark this special year.

Holy Doors are helpful signs for us. The open door is a reminder that we must open the doors of our minds and hearts to the wonder of God's love for us and to those around us too. This can be challenging and uncomfortable. I may not feel ready for others - of for God. I may fell a little bit vulnerable as I open myself to God,s love and his call to go out to others.

Christmas is the day on which we celebrate the birth of Jesus, We see the Christ-child, vulnerable as all babies are vulnerable, relying completely on the love and care of Mary and Joseph. He is born in poverty, soon to be a refugee in a foreign land. This infant, whose birth we celebrate is God-with-us. In Jesus we see God becoming vulnerable with and for us.

He invites us to open to door of our hearts to mercy. He invites us to open the door of welcome to others, especially to those who are themselves weak, alone, poor, unwell in mind or body, to the refugee, the prisoner and the one affected by crime, to those are searching for mercy themselves. In being merciful, we find true happiness and wholeness in our lives.

May this Christmas, in this special Jubilee Year of Mercy, be a time when every one of us finds afresh the mercy of the God who loves us and a time when we are truly merciful to others. May our homes, our places of work, our churches, our shops and streets be places of mercy - and may you and your loved ones have a truly happy and blessed Christmas.

Bishop Richard Moth opened a Holy Door at Arundel Cathedral on Sunday 13th December to officially begin the Year of Mercy, called by Pope Francis, here in the Diocese of Arundel & Brighton. Several hundred people from around the Diocese including clergy along with ecumenical presence of the Anglican Bishop of Chichester, Rt. Rev Martin Warner, were present for the opening of the Holy Door.

Pope Francis had already opened a Holy Door on Tuesday 8th December at St Peter’s in Rome and had called upon fellow Bishops around the world to open a Holy Door in their own Cathedrals and important churches in their diocese for the Year of Mercy.

Doors are a symbol of openness to God’s mercy. Bishop Richard said in his recent Pastoral Letter to the Diocese “The Holy Door of Cathedral or Church must be a reminder to us of the door of the heart and the Gospel calls us to open the doors of our hearts and minds to the gift of mercy. We must be bearers of that mercy to the refugee, to the asylum seeker, to the prisoner and the victim of crime, to the one who is homeless, to the one who may have a roof over their head but seeks the peace and mercy that comes in knowing Christ.”

Two other Holy Doors were opened across the Diocese on the same day, at The Shrine of Our Lady of Consolation, West Grinstead, West Sussex and at the Parish of Christ the Prince of Peace, Weybridge in Surrey. A third door is to be opened at the start of the new term in January in the chapel at Mayfield School in East Sussex.

Bishop Richard called on the people of the Diocese, during his sermon at the Mass for the opening of the Holy Door, to be missionaries, sharing God’s mercy with the world and pointing the way to Jesus Christ. He said “We must find the joy of the Gospel in the depth of our being.” A joy to share with the whole world.

He also called for a renewal of the Sacrament of Reconciliation (Confession) just as he had in his recent Pastoral Letter Bishop Richard where he also charged the people of the Diocese “to reach out to those who are estranged from the Church or who, for whatever reason, have not heard the message of the Gospel.”

Finally in his homily he left us with the prayer that for ourselves and for others: “We may be ever open to God’s mercy.”

The Mass concluded with the blessing of an Icon of Our Lady of Consolation, a copy of the Icon at the shrine in West Grinstead, which is to travel around the Diocese to parishes, prisons and schools in the course of the year. A sign of the mercy of God received through Mary, the mother of Jesus.

During the year he wishes the people in the Diocese not only to carry out acts of mercy for our neighbours, to reach out to all distanced from the Church, but also to deepen their life of prayer and their relationship with God, and finally to go in pilgrimage to one of the designated Holy Doors.

There is a full programme of events now in place to support all these aims, details of which are on the Diocesan website – www.abdiocese.org.uk. 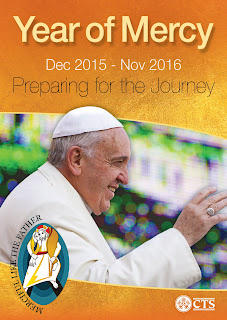 Bishop Richard Moth is to open a Holy Door at Arundel Cathedral for the Year of Mercy on Sunday 13 December beginning at 5pm in the Cathedral Centre.

All are welcome to attend.

Bishop Richard also issued a Pastoral Letter the weekend 5th/6th  December about the Year of Mercy. You can listen to or read his letter in full here.

Bishop Richard will himself open a Holy Door on Sunday 13th December at 5pm at Arundel Cathedral following the opening of a Holy Door at St Peter's in Rome by Pope Francis on Tuesday 8th December.

For more information on the Year of Mercy see here.
Posted by AB News Blog at 17:22 No comments:

Please pray for Deacon Ted Connelly who died recently at the age of 102, a deacon of Northampton Diocese who was living in the parish of Camberley and Bagshot in Surrey in this Diocese. Not only was he one of the first deacons in England and Wales, being ordained in 1976, but he was probably the oldest living Latin Rite Deacon in the world.

His Funeral will take place on Wednesday 16th December, 10.30am at SS Peter & John, Camberley.

Ted was born 10th January 1914. The family joke is that his birth started the First World War. He was born to Hannah and John and was one of four boys. He lived in very poor conditions in the notorious “back to back” houses of Birmingham. Only 12 such houses remain as a museum near the city centre. The rest were knocked down as slums 50 years ago.

He was a bright boy and got a place in the Catholic Grammar School of St. Phillips which still exists today, albeit in a different form. He ended up as head boy and captain of football, cricket and athletics. He was academically very intelligent and his Bishop gave this poor boy a scholarship to Birmingham University where he got a first class honours degree in Chemistry.

He was courting his beloved, Dolly, when he moved to ICI Paints Division in Slough. They were married for over 50 years with two children, David and Mary. Ted absolutely adored her. He commuted back and forth to Birmingham whilst courting until they married just before the Second World War. As a research chemist working on camouflage paints for warplanes he was not called up and ended up in the Home Guard.

Ted was a senior manager in research and development at ICI. After 30 years he retired early and began his next career.

From home Dolly and Ted began making shopping bags and handbags. They designed and made the templates. Dolly did most of the sewing. The marketing was by word of mouth and friends and family were inveigled into becoming unpaid salespersons.....and so it continued for over 10 years.

And so to his last career! In his late fifties, Ted had a spiritual transformation where his religion moved from theology to an experiential relationship with God. He talked to his son David about meeting his “Dad” who was God the Father whom Jesus also called Dad (Abba). Quite amazing really when you understand the brokenness of his own biological father who had been an alcoholic and had abandoned his family to poverty. Fr. David Woodward called him to be a deacon and was ordained as one of the first permanent deacons in the country together with three others from the parish on 9th July 1976. He retired from active ministry when he was ninety!!!!! Ted officiated at marriages, funerals and baptisms. He was active in the SVP and was a regular hospital visitor. He also preached regularly and typed out every one.

Ted was a man of huge determination and iron will. He was also a gregarious, passionate man with a generous heart. As he has got older, he has grow ever closer to his Lord and you would find him reading the scriptures whenever people visited him. He delighted in Mass and the Eucharist which he received every day. He was loved by many. He was a great and a holy man “in whom the Lord is well pleased”.

A full life well lived. May he rest in peace.
Posted by AB News Blog at 15:57 No comments: