The parish of St Clement's, Ewell recently celebrated the 80th birthdays and 55th wedding anniversary of two of its stalwarts, Lil and Mick Ryan. They have been active in the parish for well over 40 years. The Saturday evening Mass was dedicated to them and Fr Graham Bamford, the parish priest invited them to renew their marriage vows. It was easy to see that they are loved and appreciated by us all.

After Mass the church hall was bursting with close on 100 people: their son Mike, friends and parishioners. We tucked into a hog roast with numerous accompaniments. The food table was groaning! For once Lil was not allowed to organise or contribute to the event. This was a first, as every single gathering at St Clement’s has seen Lil at the helm: in the kitchen cooking and serving, setting up her stall at the parish fairs, being the mastermind behind the jumble sales – you name it, Lil did it!

Lil and Mick chose the music they would like to be played in the background and as the evening advanced their favourite Irish tunes came into their own. There was silence as our lovely songbird, Betty Lynch, began to sing “The Fields of Athenry” and then an enormous wave of voices joined in the choruses.

Finally Lil and Mick cut the cake (or cakes – one for their birthdays and one for their wedding anniversary). It was a truly lovely evening and a great tribute to two wonderful people.

Fr Jonathan How, Parish Priest of Sacred Heart, Cobham, Surrey and a priest of the Diocese of Arundel and Brighton, has been presented with the Bronze Wolf Award, the highest award for adults in World Scouting, for his contribution in the area of spiritual development and Interreligious Dialogue in scouting.

In particular Fr Jonathan had been responsible for the Religious and Spiritual Programme at the 2007 World Scout Jamboree in the UK and for its subsequent development and growth. He has also helped the movement in its important work in Interreligious Dialogue.

Fr Jonathan said "Scouting is a major international movement with over 50 million members from all over the world and from every religion and none. It is a real privilege to be able to support their efforts to create a better world through the spiritual and religious development of their members.

“I was quite shocked when I received a letter last month telling me about the award. They are really rare - in fact the list of recipients is short enough that there is even a Wikipedia page of them. Most of us know how much Scouting is part of our lives, and we try to beaver away quietly, but it's only when someone tells us that we realise how much our scouting is part of other people's lives too and that our efforts have been noticed.”

Bishop Richard Moth, Fr Jonathan’s Bishop and Liaison Bishop for Scouting said “This award is a testimony to all that Fr Jonathan gives to Scouting and to his witness to so many young people and the leadership of Scouting round the world. It is well deserved.”

The World Organisation of the Scout Movement has 50 million members from 169 Member Organisations, one of which is The Scout Association in the UK.

The Award was presented at the World Scout Conference in Baku, Azerbaijan on 18 August 2017.

The presentation is on YouTube at 1hr15 https://www.youtube.com/watch?v=lCrMViI7E8A bring life.”
Posted by AB News Blog at 16:01 No comments:

Cardinal Cormac Murphy O’Connor is seriously ill in hospital and I would ask you to remember him very specially in your prayers.

In a letter sent yesterday to all the Bishops, Cardinal Vincent writes: "these loving prayers are a source of great strength and comfort as he calmly ponders on all that lies ahead, all in God's good time. May the Lord strengthen him in faith and trust and may the prayers of the Church, which he loves so much, comfort and uphold him.”

As we all know, Cardinal Cormac holds this Diocese in great affection and will, I know, value the prayers of us all at this time. 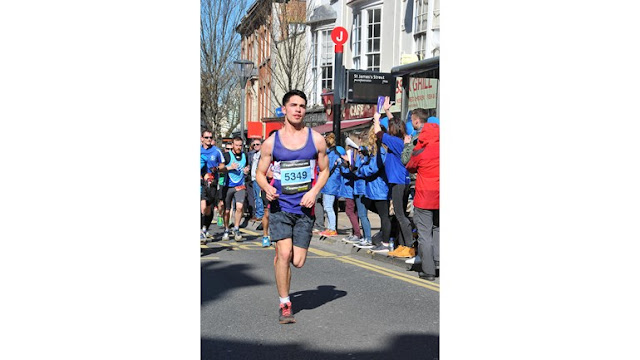 Reuben Selby is one of the long term altar servers at Mass at Christ the King, Steyning in the Parish of Our Lady Queen of Peace, Adur Valley.


Last year he ran the Brighton Marathon for Cancer Research with a finishing time of 3 hours and 22 minutes.

This year he is running the Berlin Marathon to raise funds for MIND a charity that provides advice and support to empower anyone experiencing a mental health problem. Every year one in four of us will experience a mental health problem. Reuben says he wants to play a part in increasing awareness of mental ill health and in reducing the stigma that is so often attached to it.

He is hoping to better his time this year and has been putting in many hours of training to achieve this.

He also wants to increase the amount of donations for his chosen charity and asks that people who wish to kindly donate go to his Just Giving Fund Raising Page https://www.justgiving.com/fundraising/reuben-selby2
Posted by AB News Blog at 11:26 No comments:

Happy Feast of the Assumption!

Happy Feast of the Assumption of Mary, the Mother of God into Heaven. She is the patroness of the Diocese of Arundel & Brighton.

The Catholic Church teaches as dogma that the Virgin Mary "having completed the course of her earthly life, was assumed body and soul into heavenly glory". This doctrine was dogmatically defined by Pope Pius XII on 1 November 1950, in the apostolic constitution Munificentissimus Deus by exercising papal infallibility.

It is a Holy Day of Obligation in England & Wales.
Posted by AB News Blog at 00:30 No comments:

Email ThisBlogThis!Share to TwitterShare to FacebookShare to Pinterest
Labels: arundel and brighton, Assumption, holy day of obligation, Our Lady, patroness

Pilgrims including Bishop Richard have now returned from the annual Arundel & Brighton Pilgrimage to the Marian Shrine in Lourdes.

You can see all the video podcasts from Bishop Richard in Lourdes on the Diocesan Vimeo site.
Posted by AB News Blog at 16:00 No comments:

Read New Deacon's Own Story on his Recent Ordination

I was ordained to the diaconate at Villa Palazzola on 12th July, by the Bishop of Middlesbrough, Terrence Drainey, along with five other men from the Venerable English College. By tradition, the ordinations take place at the College's summer residence, Villa Palazzola, which is located just outside Rome, in a solitary, but picturesque spot on a cliff-top overlooking Lake Albano. The church is small, dedicated to Our Lady of the Snows. The weather was anything but snowy, however, the fierce Roman sunshine making the ordination Mass itself a rather uncomfortably warm affair! Despite the distraction of the heat, it was still a beautiful occasion - more beautiful than I had imagined it would be.

I suppose that, as a seminarian, you are concentrating so much on preparing for future priestly ministry that you can easily overlook the phase that all priests must pass through as a deacon. I say, "pass through", but technically speaking, this is incorrect: in fact, a man ordained as a deacon remains one even if and when he becomes a priest later. In this way, he is conformed to Christ the "Servant" (the literal meaning of the word "deacon") and remains so for his whole life.

Thankfully, having made a good retreat and having had plenty of time over the last few months to reflect on the particular nature of the diaconate meant that on the day, my brothers and I were able to concentrate well on the meaning of what was going on in the various parts of the Ordination rite: the promises of obedience and celibacy, the prostration and Litany of the Saints, the laying on of hands, the prayer of consecration, and the investiture with stole and dalmatic. As with any liturgy, then, it was all the more meaningful and powerful in opening our eyes to God's presence in the rite, and in the Mass, because we were well prepared to take part in it.

The celebration that followed the Mass was wonderful too: lunch in the garden of the Villa with a few members of family and friends, including several priests of our own diocese. It was a such a joy to celebrate with them, just as it has been to come back to the diocese this summer and begin exercising my ministry here. I'll be spending the following academic year back in Rome for one last time, finishing studies in preparation for final ordination to the priesthood in 2018. Please pray for me, and for my brother seminarians from A&B during this time, and for more vocations to the priesthood.

The Oldest Flower Arranger in the Diocese?

Ninety Years ago a sweet chubby faced boy was baptised down the road from St Paul’s Church at the Priory, Haywards Heath. Why there and not the church? St Paul’s had yet to be consecrated. The parents took some time working out what to name their new born baby, but eventually settled on ‘Robert Clement Tunks’. Despite their best efforts to add a bit of class to the family, for most of his life he has been known simply as ‘Bob’.

He cannot remember when he became the official flower arranger at St Paul’s Church ‘It must have been in the early 1970s and I have never stopped!’ reflected this specialist. Most parishioners do not know St Paul’s Parish without this stalwart. To celebrate Fr Vlad gave him a special blessing, thanking him for his never ending ministry in proclaiming the Glory of God. Parishioner, Ann Herbert, presented him with a special bouquet of flowers. Although at ninety he is still known as a sharp-eyed regional judge with the National Association of Flower Arrangement Societies (NAFAS), he was too polite to score this gift!
Posted by AB News Blog at 12:34 No comments: