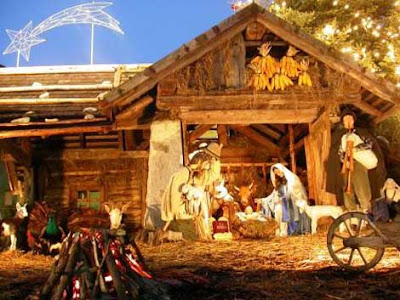 Bishop Richard extends his blessing to all peoples of the Diocese for this Christmas Season.

He says : "Every blessing and best wish to all for the great Feast of Christmas ‘Today a Saviour has been born to us, He is Christ the Lord!’"

He hopes it will be both a prayer-filled time and a joyous celebration of the birth of Jesus, our Lord and Saviour.
Posted by AB News Blog at 21:00 No comments:

In the evening of 19th December 2018 in the historic town of Arundel in its Cathedral, Deacon Jack Lusted was ordained a priest by Bishop Richard Moth for the Roman Catholic Diocese of Arundel & Brighton.

Father Jack, as he can now be called, was born in Eastbourne and brought up in Hailsham where he went to school before attending Sussex University. He worked as a Physics teacher and then with British Telecom before entering Anglican ministry. After training in Oxford, he worked in various Anglican parishes across Sussex before he, with his family, made the brave decision to be received into the Catholic Church in 2014.

Following his reception into the Catholic Church he was accepted for training for the Catholic priesthood at St John’s Seminary, Wonersh, near Guildford, Surrey. He was ordained a deacon in June 2018 and has been working as a deacon in the parish of St Mary’s, Crowborough until his ordination at Arundel on 19th December. He is currently awaiting an appointment to a parish.

Fr Jack now begins the next stage of his life as a Catholic priest in a parish saying Mass, visiting the sick, working with young people, celebrating funerals and baptisms, visiting local schools and much more.

Fr Jack said: “My ordination is the culmination of a process that has taken four years to complete, from the day when my family and I decided to respond to Our Lord's prayer that all might be one to today. While there have been challenges along the way, never once has that decision been doubted.”

He continued, “It is a great joy and privileged to be ordained a Catholic priest. I look forward with eager anticipation to my work as a priest in Christ's church, and thank everyone for their support and encouragement.”

The ordination was followed by a wonderful reception in the Arundel Cathedral Centre where Fr Jack was warmly received by family, friends, clergy and parishioners.
Posted by AB News Blog at 11:30 No comments:

Bishops' Conference Statement on the Settlement Scheme for EU citizens 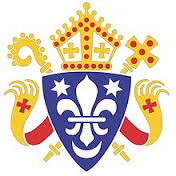 The Bishops of England and Wales have issued the followed press statement:

The Catholic Church in England and Wales stands in solidarity with all EU citizens who have made their home here. As the majority are themselves Catholic this is a special pastoral concern for us.

The Church has experienced first-hand the extensive contribution that people from across Europe have made to our society. They are an integral and valued part of our parishes, schools and communities.

We also recognise the evidence that immigration from Europe has not undermined opportunities for UK citizens, but rather brought considerable economic and social benefits.

It is clear that since the 2016 referendum many people living here have faced profound uncertainty and insecurity about their future.

Although the reassurances offered by senior politicians are important, people have been given far too little information or binding commitments about their right to stay.

For some this has been worsened by the appalling rise in hate crime, which has left them feeling unwelcome or even threatened in the country that has become their home.

The Settlement Scheme
The government will soon launch a Settlement Scheme, offering EU citizens living here a legal route to remain. While this is an important step we understand that, especially for people who have contributed to our society over many years, it may feel unjust and divisive that they are now required to apply for permission to stay.

We also expect that some people, particularly those who are already vulnerable, may face difficulties in practically accessing the scheme, leaving their immigration status at risk.

We strongly oppose the decision to charge people for securing the rights they already have. This is not only unprincipled but will also create a barrier for larger families or people facing financial difficulties.

The Bishops’ Conference has made representations on these issues to ministers and through the Home Office working groups set up to discuss the Settlement Scheme. We will continue to do so as it is implemented.

Applying for the scheme
Notwithstanding our concerns about these principles and practicalities, it remains a fact that EU citizens must apply if they are to protect their existing rights and their place in our society.

We therefore ask Catholic parishes, schools and organisations to bring the Settlement Scheme to the attention of all who need to avail of it and to be aware of vulnerable people who may face barriers to applying or not realise that they need to apply.

In particular we encourage you to signpost people towards the official information on the Settlement Scheme: gov.uk/settled-status-eu-citizens-families

And to make use of the various information resources available:
gov.uk/government/publications/eu-settlement-scheme-community-leaders-toolkit

Finally we urge the whole Catholic community to take up Pope Francis’ call to welcome, protect, promote and help to integrate everyone who has made their home here - with particular concern at present for our European brothers and sisters.

http://catholicnews.org.uk/europe-settlement-scheme-121218
Posted by AB News Blog at 16:19 No comments:

Beatification of the Martyrs of Algeria - Martyrs for Peace

In a message to the people of Algeria on Saturday, the Feast of the Immaculate Conception, Pope Francis urged them to go forward in healing the wounds of the past and nurturing a culture of encounter and coexistence.

The 19 martyrs were killed between 1994 and 1996 during the civil war in Algeria between the government and Islamist groups. All were religious and they all shared a love of Christ and a desire to serve the Muslim people of the nation.

The Pope's message was read after the Beatification Mass presided over in the city of Oran by Cardinal Angelo Becciu, prefect of the Congregation for the Causes of the Saints.

Pope Francis described the celebration as a joyful one for the Church in Algeria and said he joins the community in giving thanks "for these lives given totally for the love of God, the country and all its inhabitants." May this celebration, he said, "help to heal the wounds of the past and to create a new dynamic of encounter and coexistence in the following of our Blessed."

The Pope thanked the political authorities of Algeria for having "made possible the celebration on Algerian soil of the beatification of Bishop Pierre Claverie and of his eighteen martyr companions" and he expressed affection and closeness to the Algerian people "who experienced great suffering during the social crisis of which they were victims in the last years of the last century."

He said that while he celebrates "the fidelity of these martyrs to God's plan for peace" he also prays for the "sons and daughters of Algeria who, like the martyrs, became victims of the same violence for having lived with respect for others and fidelity towards their duties as believers and citizens.

"It is also for them that we raise our prayer and express our grateful homage," he said.

The Catholic Church in Algeria, the Pope continued, considers itself the heir, together with the whole Algerian nation, of the great message of love spread by one of the many spiritual teachers of the land, Saint Augustine of Hippo.

The Algerian Church, he said, "wishes to serve the same message in these times when all peoples are seeking to advance their aspiration to live together in peace."

"By beatifying our nineteen brothers and sisters, Pope Francis said, the Church wishes to bear witness to her desire to continue to work for dialogue, harmony and friendship."

We believe, he concluded, that this unprecedented event in the country "will draw in the Algerian sky a great sign of brotherhood addressed to the whole world."

See film Of Gods and Men about Cisterian Monastery most of whose members were martyr
Posted by AB News Blog at 11:23 No comments: